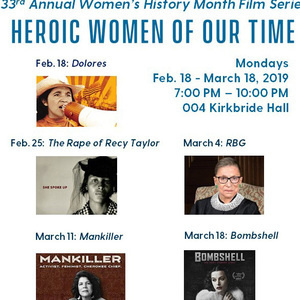 Heroic Women of Our Time

Each film is followed by a featured speaker, who will lead a discussion with the audience. The film series is free and open to the public.

Dolores Huerta co-founded the United Farm Workers and has spent her life as a labor organizer, civil rights advocate and women’s rights activist.  This documentary film about the woman who coined the farmworkers’ famous slogan, “Sí, se puede”—“yes, we can”—chronicles her evolution from a young woman outraged by economic and social injustices into an outspoken champion for the downtrodden.

Recy Taylor, a 24-year-old black mother, and sharecropper was gang-raped by six white boys in 1944 Alabama. Common in Jim Crow South, few women spoke up in fear for their lives. Not Recy Taylor, who bravely identified her rapists. The NAACP sent its chief rape investigator Rosa Parks, who rallied support and triggered an unprecedented outcry for justice.  This film exposes a legacy of physical abuse of black women and reveals Rosa Parks’ intimate role in Recy Taylor’s story.

This is the story of an American legend, Wilma Mankiller, who overcame rampant sexism and personal challenges to emerge as the Cherokee Nation’s first woman Principal Chief in 1985.  As chief, Mankiller improved the nation's health care, education and housing systems, and developed partnerships with the U.S. government. Crafted from archival footage and live interviews with Mankiller’s political colleagues, friends, and family, the film reminds audiences of the true meaning of servant leadership and serves as a wakeup call to take action for positive change.

Hedy Lamarr was a Hollywood movie star who was hailed as the most beautiful and glamorous woman in the world. However, that was only the surface that tragically obscured her astounding true talents and prevented her from receiving the credit she deserved as an ingenious inventor. Lamarr invented a covert communication system to try to defeat the Nazis during WWII, but instead of recognizing her work she was told to sell kisses for war bonds. It was only toward the very end of her life that tech pioneers discovered that it was her concept that is now used as the basis for secure WiFi, GPS, and Bluetooth technologies.

The series is co-sponsored by the University of Delaware departments of Africana Studies, Anthropology, History, and Women and Gender Studies; the Faculty Senate Committee on Cultural Activities and Public Events (CAPE) and the Library, Museums & Press.