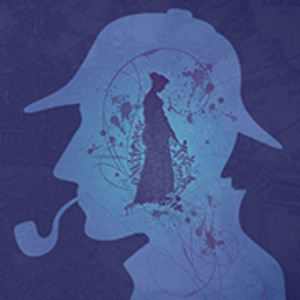 A Scandal in Bohemia

In this exciting and amusing Sherlock Holmes story, the King of Bohemia enlists the services of the great detective and his faithful friend Dr. Watson to recover a very valuable photograph that could ruin the young King.

Newly engaged to a Scandinavian princess, the King is worried his royal relatives will disapprove of his secret past with a young American opera singer, Irene Adler, a relationship which is documented in the photograph. Miss Adler now threatens to send the condemning photograph to the King’s fiancée.

The King is desperate to possess and suppress this photograph. Offers of increasingly large sums of money and several attempts to break-in to Miss Adler’s home to steal it are unsuccessful. Sherlock Holmes is the King’s last hope!

Intrigue and adventure follow Holmes and Watson as they find Miss Adler to be a most cunning adversary.

Stream the REP's audio presentation of A Scandal in Bohemia for FREE at anytime September 29th - October 17th through the REP's website!