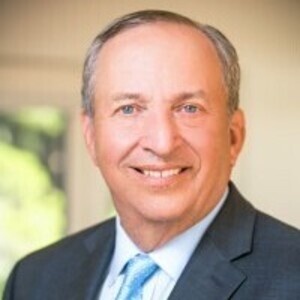 An Economic Strategy for the U.S. with Lawrence H. Summers

Please join us for the annual Hutchinson Lecture with Lawrence H. Summers,

Former Treasury Secretary Lawrence H. Summers is one of America’s leading economists. In addition to serving as 71st Secretary of  the Treasury in the Clinton Administration, Dr. Summers served as Director of the White House National Economic Council in the Obama Administration, as President of Harvard University, and as the Chief Economist of the World Bank.

Dr. Summers’ tenure at the U.S. Treasury coincided with the longest period of sustained economic growth in U.S. history. He is the only Treasury Secretary in the last half century to have left office with the national budget in surplus. Dr. Summers has played a key role in addressing every major financial crisis for the last two decades.

During the 1990s, he was a leader in crafting the U.S. response to international financial crises arising in Mexico, Brazil, Russia, Japan, and Asian emerging markets. As one of President Obama’s chief economic advisors, Dr. Summers’ thinking helped shape the U.S. response to the 2008 financial crisis, to the failure of the automobile industry, and to the pressures on the European monetary system. Upon Summers’ departure from the White House, President Obama said, “I will always be grateful that at a time of great peril for our country, a man of Larry’s brilliance, experience and judgment was willing to answer the call and lead our economic team.” The Economist recognized his influence when it defined the “Summers Doctrine,” an approach to economic policy during financial crises that fuses a microeconomic “laissez faire” mentality with macroeconomic activism. “Markets should allocate capital, labour and ideas without interference, but sometimes markets go haywire, and must be counteracted forcefully by government.”

Summers’ five years as President of Harvard represented a time of major innovation for the University. He focused on equality of opportunity and removing all financial obligation from students with family incomes below $60,000 a year. He launched a major effort to make Boston, and Cambridge in particular, the global leader in life sciences research, with the formation of major programs for stem cell research and genomics. Perhaps most importantly, he led efforts to renew Harvard College with dramatic increases in study abroad programs, faculty-student contact, and collaboration across the University during his tenure.

Currently, Dr. Summers is the President Emeritus and the Charles W. Eliot University Professor at Harvard University, where he became a full professor at age 28, one of the youngest in Harvard’s recent history. He directs the University’s Mossavar-Rahmani Center for Business and Government. Summers was the first social scientist to receive the National Science Foundation’s Alan Waterman Award for scientific achievement and, in 1993, he was awarded the John Bates Clark Medal, given to the most outstanding economist under 40 in the United States. He was elected to the National Academy of Sciences in 2002. He has published more than 150 papers in scholarly journals.

Summers is an advisor to businesses and investors. He serves on the board of  Square and Premise. He chairs the board of the Center for Global Development and on the board of ONE. He is an advisor to The Hamilton Project, The Hutchins Center on Fiscal & Monetary Policy and the Peterson Institute for International Economics. He is a distinguished senior fellow at the Center for American Progress and recently co-chaired the Commission on Inclusive Prosperity. He recently launched a Task Force on Fiscal Policy with Mayor Bloomberg and chaired the Commission on Global Health, lauded by the UN Secretary General who noted that it “will bring more than health – it will bring equity, and contribute to a life of dignity for all.”

President Bill Clinton said that Larry Summers “has the rare ability to see the world that is taking shape and the skill to help to bring it into being.” He has been recognized as one of the world’s most influential thinkers by Time, Foreign Policy, Prospect and The Economist magazines among many others. In his speeches, regular newspaper columns in The Financial Times and public commentary, he continues to move forward the debate on national and global economic policy.

The Hutchinson Lecture in Macroeconomics, which is sponsored annually by the Department of Economics, was established in 1990 to honor the distinguished academic career of the late Harry D. Hutchinson, a professor of economics who taught at UD from 1959-89.

Each year a distinguished scholar and policy-maker is invited to present the Hutchinson Lecture in the spring semester.

This event is co-sponsored by Lerner College of Business and the Biden Institute .

UD photography and videography will be present at this event.

off Route 896, on David Hollowell Drive