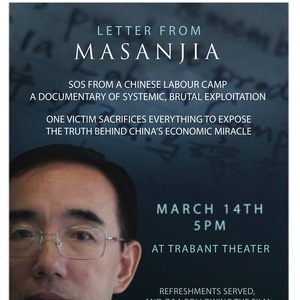 When an SOS note from a political prisoner in China is discovered in a box of Kmart Halloween decorations by a mom in Oregon, it sparks headlines that push the Chinese government to abolish its cruel labor camp system, and inspires the note’s author to expose ongoing human rights violations In China, despite the risks.

The filmmakers risked everything to capture secret footage and show the world how China treats activists.

Refreshments will be served.