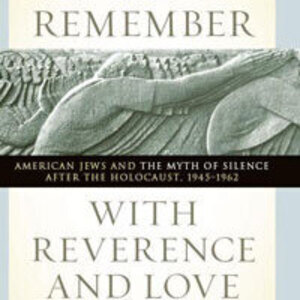 Join a community and campus-wide lecture to commemorate Holocaust remembrance day, sponsored by Jewish Studies Program. Professor Hasia Diner of NYU will deliver a lecture on her book "We Remember with Reverence and Love: American Jews and the Myth of Silence after the Holocaust, 1945-1962_ (NYU Press, 2009)"

It has become an accepted truth: after World War II, American Jews chose to be silent about the mass murder of millions of their European brothers and sisters at the hands of the Nazis. In this compelling lecture, Hasia Diner explodes the myth that postwar American Jews “forgot” the tragedy of European Jewry. Uncovering a rich and incredibly varied trove of remembrances—in song, literature, liturgy, public display, political activism, and hundreds of other forms—We Remember with Reverence and Love shows that publicly memorializing those who died in the Holocaust arose from a deep and powerful element of Jewish life in postwar America.