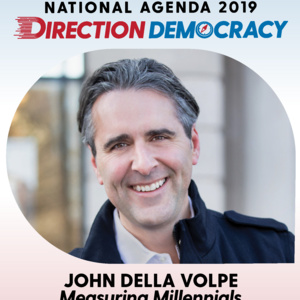 "Measuring Millennials"―The University of Delaware’s Center for Political Communication hosts the ninth annual National Agenda speaker series. "Direction Democracy" explores where we have been, where we are going, and the current state of democracy in the United States. John Della Volpe directs polling at the Harvard Kennedy School Institute of Politics. The Washington Post called Della Volpe one of the world’s leading authorities on global sentiment, opinion, and influence―especially among Millennials. The founder of SocialSphere, a public opinion and analytics company, has appeared on national media outlets such as MSNBC’s Morning Joe and The Daily Show with Trevor Noah.

From The North: Take I-95 South to Exit 1B (Newark―University of Delaware), which is Route 896 North. Follow Route 896 north into Newark, where it becomes S. College Avenue. Follow S. College northbound. Mitchell Hall is 2.4 miles north of I-95 on the right.

From The South: Take Route 13 North to the Route 1 Bypass. Follow Route 1 North and exit at Route 896. Follow for a few miles, go over the railroad tracks and make a right at the traffic light, following signs for Route 896 North. Follow for several miles, crossing the Chesapeake and Delaware Canal, then Route 40 and I-95. Follow Route 896 north into Newark, where it becomes S. College Avenue northbound. Mitchell Hall is 2.4 miles north of I-95 on the right.

From The West: Take the Pennsylvania Turnpike East to Route 283 South. Continue on Route 283 South, which becomes Route 30 East outside of Lancaster, to Route 896 South. As you reach campus and cross the railroad tracks, immediately turn left onto Delaware Avenue and right (at the second traffic light) onto South College Avenue. Continue southbound on South College Avenue; Mitchell Hall is 0.1 mile south on the left.