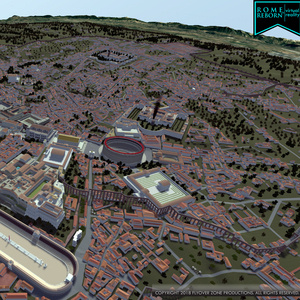 Indiana University Professor of Informatics and digital archaeologist Dr. Bernard Frischer will present his "Rome Reborn Project," a 3D digital reconstruction of ancient Rome in AD 320, the year representing the peak of urban development in the eternal city.

Dr. Frischer’s talk will depart from the claim that a reconstruction of a complex city like ancient Rome is a case in point of Aristotle’s famous idea (Met. 1045a8-10) that “the whole is not a heap but something greater than the sum of its parts.” Until now, Roman topographers have approached the imperial city by concentration on a specific monument or on the prestige building projects of an individual emperor or dynasty. Now, thanks to the availability of the interactive city model, we can look at the city in a more holistic way. Like all new scientific instruments, Rome Reborn allows us to make observations and to run experiments that would otherwise be impossible without time travel.

off South College Avenue in the center of The Green