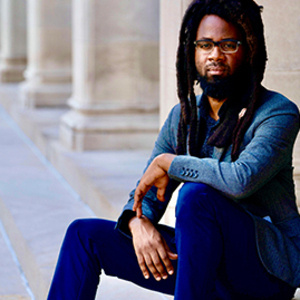 “The Construction of Black Men’s Criminality"

The event is free and open to the public; however, you must register to receive a Zoom link. Upon registration, you will receive an email with a link and a passcode to enter the Zoom session.

Co-sponsored by the History Department’s Speaks-Warnock Lecture Fund, the Department of Africana Studies, and the UD Antiracism Initiative (UDARI).

Douglas Flowe is an Assistant Professor of History at Washington University in St. Louis where he teaches courses on urban history, criminality, masculinity, and other subjects relating to race, crime, and gender. He received his Ph.D. at the University of Rochester and has recently published his first book, Uncontrollable Blackness: African American Men and Criminality in Jim Crow New York (UNC Press). His work has appeared in publications such as the Journal of Urban History and the Journal of African American History, and he is currently on a second book that will trace the experiences of black inmates in the mid-twentieth century carceral state.

Cheryl D. Hicks is an associate professor of Africana Studies and History at the University of Delaware. Her research addresses the intersections of race, class, gender, sexuality, and the law. She specializes in late nineteenth and twentieth-century African American and American history as well as urban, gender, and civil rights history. Hicks is the author of Talk With You Like a Woman: African American Women, Justice, and Reform in New York, 1890-1935 (2010), a book that illuminates the voices and viewpoints of black working-class women, especially southern migrants, who were the subjects of urban and penal reform in early-twentieth-century New York. The book won the 2011 Letitia Woods Brown Book Award from the Association of Black Women Historians and honorable mentions from the Organization of American Historians’ Darlene Clark Hine Award and the American Studies Association’s John Hope Franklin Prize. She has published in The Journal of African American History, The University of Pennsylvania Law Review, and the Journal of the History of Sexuality. Her current project focuses on the shifting meanings of sexuality, criminality, and black civil rights struggles in Gilded Age and Progressive-Era America.