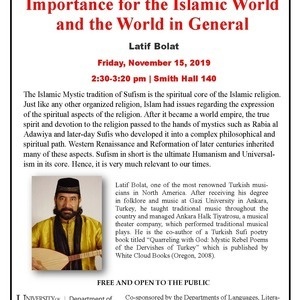 Talk by Sufi Musician Latif Bolat: Mystical Islam and its Historical Importance for the Islamic World and the World in General

Talk will be followed by Q&A. The Islamic Mystic tradition of Sufism is the spiritual core of the Islamic religion. Just like any other organized religion, Islam had issues regarding the expression of the spiritual aspects of the religion. After it became a world empire, the true spirit and devotion to the religion passed to the hands of mystics such as Rabia al Adawiya and later-day Sufis who developed it into a complex philosophical and spiritual path. Western Renaissance and Reformation of later centuries inherited many of these aspects. Sufism in short is the ultimate Humanism and Universalism in its core. Hence, it is very much relevant to our times.

Academics, College of Arts and Sciences

Free and open for all

on the corner of Amstel & South College avenues