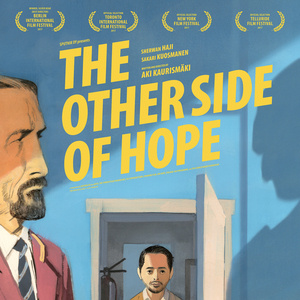 The Other Side of Hope

This film is director Aki Kaurismäki’s response to the current refugee crisis. It follows two people searching for a place to call home. A displaced Syrian lands in Helsinki as a stowaway, while a middle-aged salesman leaves behind his wife and job and buys an unprofitable seafood restaurant. After the Syrian is denied asylum, he decides not to return to Aleppo. Then the paths of the two men cross. The film was selected to play in competition at the 67th Berlin International Film Festival and won Silver Bear for best directing. (From Finland, in Finnish, 98 minutes)