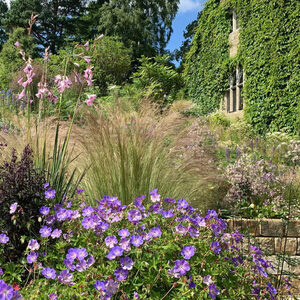 Join the UD Botanic Gardens for a virtual exploration of William

Robinson’s life, work and times at Gravetye Manor (pronounced grave-tie). The multi-talented UD alum, Rick Darke leads our wanderings, via Zoom, through this amazing Elizabethan “stone pile” surrounded by 1000 acres of gardens and forests that served as Robinson’s inspiration and living laboratory from 1884 to 1935. Emigrating from Ireland in 1861 during the potato famine, Robinson’s brilliance was quickly recognized by England’s preeminent botanical scientists:  By 1866 he was elected to the Linnean Society, sponsored by Charles Darwin. Robinson’s unparalleled influence on British horticulture was fueled by his journals and books. Though The English Flower Garden (1883) remains the bestselling gardening book ever printed, The Wild Garden (1870) has proved his most influential, and its strategic embrace of managed wildness is more relevant to today than ever before.

Modern gardeners and students of horticultural history are fortunate that Robinson left Gravetye to the William Robinson Charitable Trust. Robinson’s masterpiece, the Manor and its gardens are in the capable hands of current owners-stewards Jeremy and Elizabeth Hosking and their horticultural team headed by Great Dixter-trained Tom Coward. The Manor is conserved as an historic hotel, still set in vast acres of tranquil Sussex countryside. The Michelin Star restaurant makes imaginative use of fruits and vegetables grown in a spectacular walled garden built by Robinson. Nearby, the Bluebell Railway’s historic steam trains (famously appearing in Downton Abbey) ride rails that once carried William Robinson to his London office.  The combined experience of Gravetye is fascinating in its stories and uniquely inspirational. This virtual visit will include in-depth views over many years and in all seasons.

Rick Darke has been studying and photographing Eastern North American native plants in habitats and designed landscapes for over 40 years, and this work is reflected in many of his books including The American Woodland Garden: Capturing the Spirit of the Deciduous Forest, In Harmony with Nature: Lessons from the Arts & Crafts Garden, and The Living Landscape: Designing for Beauty and Biodiversity in the Home Garden, co-authored with Doug Tallamy. A University of Delaware Distinguished Alumnus, Darke was Curator of Plants at Longwood Gardens prior to beginning an independent consulting practice in 1998. His work is grounded in an observational ethic blending ecology, horticulture and cultural geography in the design and care of resilient living landscapes. His collaborative projects include parks, repurposed post-industrial sites, conservation developments, botanic gardens and residential landscapes. Darke has enjoyed a professional relationship with Gravetye Manor’s owners and gardening staff for over a quarter century. In 2009 he worked with Gravetye and Timber Press to produce The Wild Garden: Expanded Edition, which sets Robinson’s complete original book within a modern ecological context, bringing the concept of wild gardening to new generations.